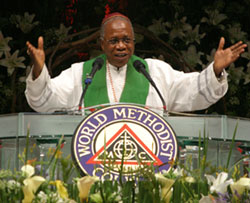 Birthdays are wonderful opportunities to let a person know what his or her life and work have meant to us. This is a personal note to my father, benefactor and mentor who turns 80 years young today. His Eminence Sunday Coffie Mbang’s name is synonymous to the Methodist Church Nigeria reconciliation after 14 years of crisis. His Eminence Mbang, the fourth indigenous and ever long serving head of Methodist Church Nigeria was born in Idua-Eket on August 26th 1936. His father, Coffie Eka-Mbang was a pastor of the Oua Iboe Church and the name of his mother is Judith Udo-Ekpo. He is happily married to former Mrs Enobong Essien on December 16, 1978. Mama Mbang is now a lawyer and the marriage is blessed with three boys – Iniabasi Abisoye, Idorenyin Segun, and Nyakno Samuel.

His Eminence Mbang attended Effoi Group primary school, Eket, St Michael’s school, Aba, Salvation Army school at Akai-Eket, Government school, Eket. He also attended Methodist Boys High School, Oron, and Methodist College, Uzuakoli and later had his ministerial training at the Trinity College, Umuahia from 1962 to 1964. In 1968, during the civil war, he transferred his study from the University of Nigeria, Nsukka to the University of Ibadan where he came in contact with Patriarch Professor Bolaji Idowu, and graduated in 1971 with B.A. Hons (Religious Studies). He was a member of the Scripture Union (SU), and President of the Student’s Christian Movement (SCM). He was offered a post-graduate scholarship to Hebrew University in Jerusalem. He later transferred his study again due to the Yom Kippur War in Israel to Harvard University, USA, and did his Doctor of Theology in Old Testament.

Patriarch Idowu who had a tremendous influence on His Eminence Mbang who later  became his academic mentor. His Eminence Mbang succeeded his mentor as head of the Methodist Church Nigeria and was installed on the Appointed Day, 20th January 1983. His tenure opened a new chapter when he announced the three points of his vision for the church – Reconciliation, Reconstruction, and Revival. On Reconciliation, the two broken Methodist factions – the Presidential and the Patriarch came together on March 4, 1990 in a ‘Reunification Service.’ As part of the price for Reconciliation, His Eminence Mbang led the Reconstruction of the Church with a new Constitution and new title – the Prelate for the head of Methodist Church. On Revival, Methodist Evangelical Movement was inaugurated in 1989 under the Department of Evangelism. His Eminence Mbang also facilitated the Fellowship of the Methodist Professionals. Despite his busy schedules, he delivered lectures on Old Testament to the Wesley School of Discipleship (WESPLE), held at Methodist Boys High School, Broad Street, Lagos. The memory of his presence and sermon during the Methodist Convention 2000, Orimerumu remains fresh. He was behind the vision of the Wesley University, Ondo, with the able and selfless support of late Professor Oduyale. Among His Eminence Mbang’s publications is ‘The Changing World and the Unchanging God.’ 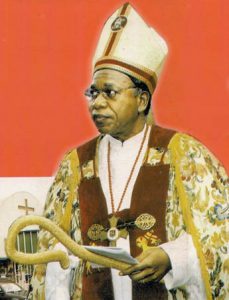 His Eminence Mbang was a major inspiration for my candidature as a Methodist minister. While serving as the Conference Editor and a part of his entourage to the Diocese of the North in 1994, in the presence of late Mama Lady Ogunnaike,  His Eminence Mbang asked me to see him  in Lagos after the tour for a letter to the then archbishop of Ilesa, the late Most Rev Olasoji Makindipe, my home bishop. Today, the rest is testimony. After working with His Eminence Mbang for 10 years in Wesley House, he approved my appointment as the pioneer Chaplain, Chapel of Christ the Light (Interdenominational), Alausa, and later, the State House Chapel, Marina, Lagos, based on the recommendation of the late Very Rev Kayode Cadmus and the former Secretary of Conference, now the archbishop of Ibadan, His Grace, Most Rev Kehinde Stephen. It was an honour for me to serve with  late Sir Samuel Olagunju Ogundipe, the founder and chairman of Prudent Bank, late Sir Air Comm. Emeka Omeruah, Sir S.U Akpan (one of his close friends), Sir James Etim Okon Inyang (former Inspector General of Police), Sir Olaniwun Ajayi, Sir Remi Omotoso and others during His Eminence Mbang’s 60th birthday in 1996 when his autobiography ‘His Master’s Will,’ by Mobolade Omonijo was launched in Lagos. 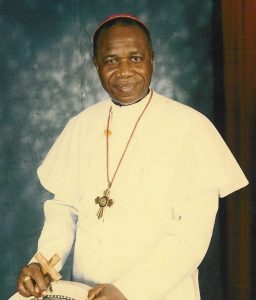 Your Eminence, as we seek the face of God to discern the mind of Christ for the Methodist Church Nigeria during the October Conference in Abuja, we shall draw strength from knowing that your prayers is with the church. For our part, it will remain our earnest concern to pray that Almighty God will continue to replenish Your Eminence and the entire family with the grace of the Holy Spirit, enduing you and all yours plenteously with all heavenly gifts in Jesus name. HAPPY BIRTHDAY TO A PAPA IN A MILLION. 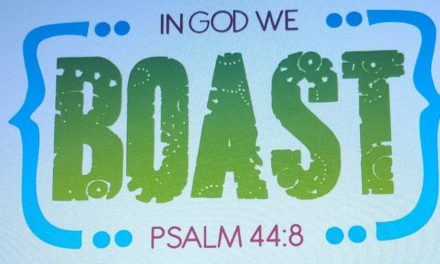 He must increase, I must decrease. 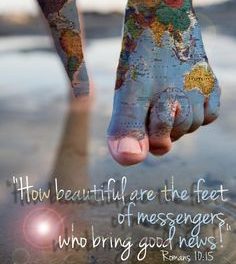 THEOLOGY AND PHILOSOPHY OF ITINERANT MINISTRY: Wesley’s ‘Sons (and Daughters) in the Gospel.’ 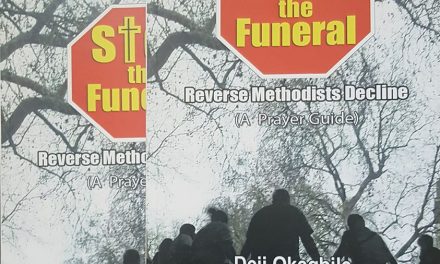 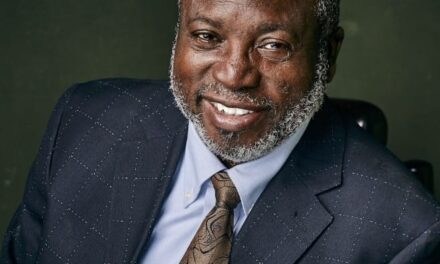