Donald Barnhouse in his book, ‘The Invisible War’ said, “The Devil’s cleverest ruse is to make believe that he does not exist.” Satan is a terrible adversary, but the one, Jesus, who is in us as Christians ‘is greater than he who is in the world’ (1Jn 4:4, Rom 8: 35-39). The Lord’s Prayer is meant to be our pattern of prayer. A missional clause in the Lord’s prayer which says “but deliver us from evil” shows us that as we totally dependent on the Spirit, we should pray daily to be delivered and protected from Satan’s assaults (Matt 6:13). The first three of the six petitions in the Lord’s Prayer are concerned with God: his name, kingdom, and will. The last three focus on our needs: bread – referring to our physical and spiritual needs – forgiveness of sins, and finally, deliverance from the evil one, Satan. To be delivered from Satan, we must consistently pray for deliverance. Jesus told Peter and the disciples that Satan had asked to sift them like wheat (Lk 22:31). The question remains for us, especially, the preachers to ask ourselves, in what ways do we incorporate our teachings and our petitions for spiritual protection into our leadership, ministry, members, and prayer life? To be delivered from evil, in humility, we must recognize our weakness and vulnerability to it. To be delivered from evil, we must be committed and remain faithful to God’s Word (Ps 119:11). No one, no debate can defeat the pull of sin in our flesh, the attraction of the world, and the power of the devil. We need God’s Redemption at Christ Expense (GRACE). Tremendous grace for believers is nurtured in a Bible preaching church, teaching the whole counsel of God and in daily meditation of God’s Word to stand against the evil one (Heb 3:13, Eph 4:22).

Jesus came to earth to destroy the works of Satan, to establish God’s kingdom (1Jn 3:8). One of the main themes in Mark’s Gospel is Jesus’ constant aim to defeat Satan and his demonic powers. In our Gospel reading today, Jesus puts into action the principle behind this spiritual warfare and conflict with Satan and his powers in his use of phrases like “bind the strong man”, that is, Satan, and “spoil his house”, that is, setting free those who are slaves to Satan or “posessed” by demonic powers and reclaiming their lives for God’s kingdom. Satan has been vanquished at the cross, he is still vicious and acting as the great adversary of Christians. It is therefore very tragic to be ignorantly a slave to Satan, hence, “Christians who are virtually oblivious of the malignant opposition of the fallen angels, are to some extent deficient in caution and dependence upon God. … The confrontation between God and Satan which centers on the cross of Christ is cosmic in its proportions and transcends the centuries of time. It is foolish and dangerous to wander, blind and deaf, along the firing line.”

Billy Graham in his book, ‘Angels: God’s Secret Agents’ explained that Satan was once a great angel created perfect and good, appointed to serve directly around God’s throne in heaven. Satan with his rebel forces became filled with pride and rebelled against God and as a result became God’s primary enemy and an enemy of all humanity as well (Ezk 28:12-15). Frederick Leahy in his book ‘Satan Cast Out – Study in Biblical Demonology presents ‘a biblical account of Christian teaching on the existence of angels – good and evil; the present position and strategy of Satan; the witness of Old and New Testament to demonic activity; the demonic in church history; and the challenge of the demons to the church of Christ, especially on the mission field.’ The Good News is that, our ‘adversary the devil’ is under the control of Christ’s victory because in the words of John Calvin, ‘The whole of Satan’s kingdom is subject to the authority of Christ.’ God never intended for the Church to be fearful or hesitant in dealing with Satan and his demonic forces.

In Mark’s gospel passage we hear about the reaction to Jesus’ activity, from his family and from the religious authorities, represented by the scribes. From a preaching perspective, any of these three characters in the gospel provides an entry point for a sermon on missional renewal and formation through power over Satan and demons. The three characters points to the crowd, the family, and the scribes in each of us, our families, churches and nations. Jesus’ own family and the religious leaders should have been the first to accept Jesus. In contrary, due to misinformation and fake preachers, Jesus’ own family thought He was out of His mind ‘went out to restrain Him, for people were saying ‘He has gone out of his mind (v 21). Members of Jesus’ family were so ignorantly concerned and misinformed about Him that they consider taking Him home by force to put an end to His ministry. Blind spot is a missional and theological calamity. Blind spot declines church. Blind spot turns movement to monument. The religious leaders, the doctors of law, who had already rejected Jesus’ claim, now attributed His power to Satan (v. 22). Jesus takes the Scribes’ blind spot, lack of missional perception, their unseen areas, the mote in their eyes, their spiritual bindness and missional dim-sightedness on board because His actions are constantly challenging the power of evil and its blind spot effects. Chad Ripperger in his book ‘Deliverance Prayer: For Use by the Laity’ aptly said, “Demons are legalistic and only follow the hierarchy of authority ordained by God’ in the family, church and nations.

Jesus is the one who is strong enough to challenge Satan and demons. This is the fact and possibility that the religious leaders have closed their minds and unwilling to let the Spirit teach them. Blind spot fuels pride and arrogance. The Scribes’ attitudes resonates with what Paul Hiebert called the blind spot “the flaw of the excluded middle.” This problem increasingly makes many to ‘become unaware of the world of spirits both good and evil, which the majority has never lost sight of.’ For Hiebert, it is one thing to embrace ‘theology affirming angels and demons, but in practice have an operational theology that lives as though God and ourselves were the only intelligences. The blind spot will show itself in our prayers if we never pray that the risen Christ might continue to bind the strongman, as it were, and spoil his goods through the victory of the cross.’ There is a story of a rich man who died and in his will, he wrote that his only son should take only one of his property and all others must go to his senior slave. The only son was furious and went to pastor for counselling. When it was time to implement the will, the senior slave organised a very flamboyant celebration for his friends and families in anticipation of his new status. When the only son was called to pick one of his father’s property, he poured encomium upon his father for his diligence and love. He picked the senior slave bearing in mind, he who owns the slave, owns the property. Overconfidence made the senior slave to become his own worst enemy while humilty of the only son to seek God’s face, helped him to repent from his blind spot against his loving father.

The three characters – the crowd, the family, and the scribes in each of us, our families, churches and nations points to our blind spots, hence, it summons us to answer the questions, ‘Is the Gospel of Jesus challenging to us? Are we humble and open enough to receive the message which Jesus brings? Are we still struggling with the Christian gospel? Are we stuck in our own dogmatism ‘blind spot’ like the Scribes in our Gospel reading today? Beloved, many accounts in the Bible make it clear that it is common for the evil spirits to make slaves of the individuals they ‘possess’ and can influence them toward evil, immorality and false religions. Evil spirits will be active especially in the end times, leading people to take part in violence, cruelty, sexual immorality, mass deception, attacks and attempts to discredit God’s Word, steering people away from correct teaching and truth (Mt 24:24, 2 Cor 11:14-15; 1 Tim 4:1, 2 Th 2:9).

The problem of blind spot promotes blasphemes against the Holy Spirit. To blaspheme means to treat God with disrespect through our words or actions. Blaspheme against the power of the Holy Spirit involves continually and deliberately rejecting the Holy Spirit’s work, including his testimony about Christ, the truth of his Word and the problem of sin (Jn 16:7-11). Those who resist when the Spirit is speaking to their own consciences are in truth, separating themselves from the only source that can lead them to repentance and forgiveness. We need Jesus to see, repent, and overcome our blind spot. 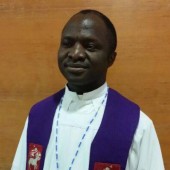 LETTER TO MY GENERATION (1). The two tribes in Nigeria: The Poor and the Rich.

2020 Theme of Growth: “The Best of all is, God is with us,” a Model for the Second Methodist turnaround strategy.